Goshen Fire Company (GFC) was organized on July 21, 1950 at a meeting of Guy Chillas, Fred LaChappelle, Herbert Schmitt, Tom Smith, Herbert Stafford, and Joseph Supplee. They along with George Coffey, Ira Hicks, and William Hoopes became the first board of trustees. Funding of the fire company started in August of 1949 with the first Goshen Country Fair.GFC’s first fire truck was kept in Dick Little’s garage at 4 Locust Street in Goshen Heights (Milltown). It was a 500 GPM Hale Pumper purchased from Paoli Fire Company for $1,500. The truck had an open cab with two seats. Other firemen rode on the running board or on the back step.

To report a fire, residents called the West Chester Police Station. The officer on duty would pick up a direct telephone line that activated a siren on a pole in Mel Stafford’s backyard. The first person to Little’s garage picked up the phone and found the location and nature of the call from the West Chester Police.

Money was short so firefighters’ coats and boots were purchased on a lottery basis. Each fireman put 25 cents a week in the pot and each week one fireman got a fire coat and boots. They wore retired air raid warden helmets. In fact, for the first three years, the company bought one length of hose per month, as money was available.

Charles “Dutch” Clark of Hershey’s Mill Road, Malvern was asked to be the first fire chief. Chief Clark took a group of men with no experience and made them a fire crew. George Parry became the first fire police chief.

Early in 1952, a second engine was acquired but there was no room in Dick Little’s garage. The solution to this problem came from Harry F. Taylor, a real estate developer who lived at the corner of West Chester Pike and Reservoir Road and the two acres that he had donated along Park Avenue on November 1, 1950. In addition, East Goshen Township agreed to invest $3,000 in the building providing that a garage be added to house their truck. This was agreeable to the Fire Company and a building with an estimated cost of $23,000 was started. Herb Schmitt, Sam Trego, George Coffey and Guy Chillas were some of the men who volunteered their weekends to do the construction.

One night, about a week after the engines were moved to the new firehouse, the siren blew and the men woke up to see a bright glow. Joe Baldwin’s barn, which was located where Waterview apartments are now, was on fire. Everyone jumped up and ran to the scene. Only one man, Tom Supplee, remembered to go to the firehouse and get an engine.

In 1952, membership was growing. At the September Trustees meeting, 60 new members were accepted. Donations were also being received. A donation of $2.00 was received for rescuing “kitty” from a tree. An ambulance was purchased and a drive was put on to gain memberships. When the letter drive was used to gain community support it was decided that the firemen would deliver the letters to residents’ mailboxes. One rural letter carrier returned all the envelopes for postage due.

One tragedy has marred the history of the Goshen Fire Co. In October of 1955, Assistant Fire Chief George Parry gave his life while responding to a barn fire. The engine that he was riding on rolled over at the old Railroad Bridge on Route 29, Phoenixville Pike. Chief Parry was pinned underneath. The Chief’s grandson, Ken Windle served as President of the Fire Company for many years and his efforts have helped make this fire company what it is today.

At their meeting on March 5, 1958, the Board of Trustees was looking for a new Fire Chief. Bill Baldwin stated that he “did not want the job as Fire Chief because he felt that he did not have the time to devote to the job”. The Trustees prevailed in changing his mind and Bill Baldwin was Fire Chief for the next 17 years.

As the community grew, the Fire Company was called on more frequently. New methods and equipment were needed. A base station and two-way radios for three fire trucks and an ambulance were purchased. An apartment and recreation room were added to the firehouse and tenants were sought who would agree to have someone at home to answer the phone and operate the radio 24 hours a day. The arrangement with the West Chester Police Department was ended in March of 1956 when Mr. and Mrs. Leon Hutton moved into the firehouse as houseman, custodian and radio operator. This arrangement continued with several couples until 1973 when the Chester County Fire Radio went into service.

At one time, there were four pole-mounted sirens. The original one was in Goshen Heights, one was at the firehouse, one was at the comer of Routes 352 and 3 and one on Five Points Road just off of Route 3. Home alerting devices (plectrons) that were purchased starting in 1965 and personal pagers that were purchased starting in 1978 retired three of the sirens. Only the siren at the firehouse remains.

In addition to the two acres that Harry Taylor donated along Park Avenue, additional land was rented. This land was later purchased from individuals and from the East Goshen School Board. Harry Taylor had given the current fairground property to the School Board for the youth of the community. In 1962, the fairground was purchased from the School Board and a social hall was added to the original building. The social hall was later designated Supplee Hall, in honor of C. Wilmer Supplee, past Fire Police Chief and Fire Company President. By 1974, we were cramming five fire trucks, a field piece and an ambulance into those original three bays. Two short bays in front of the apartment were added. In 1985, when the Fire Company’s first ladder truck was purchased, two drive through bays were added at the east end of the building. Renovations and an addition to the firehouse in 1993 have been completed to comfortably accommodate two engines, the ladder truck, a rescue truck, two ambulances and a fire police traffic unit. The firehouse also has training facilities, office and storage space and crew area that includes a bunkroom, a TV room, a poolroom and a small kitchen.

The fire company has been home to many organizations. In 1953, Goshen Fire Company Athletic Association was formed to sponsor a baseball team. GFC has also sponsored a Boy Scout Troop and been home to a Brownie Troop. Four churches have found a home at Goshen while waiting for their own buildings to be completed. West Chester Church of Christ began meeting at the Firehouse in June of 1954. Sts. Simon and Jude, St. Francis in the Fields and Advent Lutheran have also met there.

The first women were admitted to membership in the GFC in March of 1977. Harriet Clark and Nancy Keslick joined the Fire Police. Sarah Credeur and Ann Supplee joined the Ambulance crew. Stacey Mariano became Goshen’s first female firefighter in 1982.

As the population of East Goshen Township increased, GFC looked a ways to improve the company’s response to calls. In the 1970s, through the efforts of Howard Riley, Jr. and with donations from the Hershey’s Mill development, a sub-station was opened on Greenhill Road in northern East Goshen Township. An engine, a light rescue and an ambulance operated from this station. In the summer of 1999, a new station was built at the corner of Greenhill & Boot Roads. The Greenhill Station houses an engine, ladder, 2 ambulances, and brush truck.

When GFC was young, John Bishop, Bill Keslick, Tom Supplee and others could leave their jobs to answer calls. Bishop, a plumber, once left a home without water for several hours while he went to a fire. Supplee would close his grocery store when the siren blew and customers understood. Today’s residents are more demanding and firefighters can no longer leave for every call. In 1986 and 1987, firefighter/EMTs were hired to help volunteers during working hours. We now have 8 full time and 4 part time paid men. Fortunately, some volunteers who work shifts are available during the day and some volunteers are able to leave work when a fire is larger than the paid men can handle.

Today, Goshen responds with three engines, a tower, a ladder truck, a rescue, a brush truck, four ambulances, a chief’s vehicle, duty officer vehicle, a traffic unit, and a utility vehicle. Our members are alerted by personal pagers, and reach the firehouse with the aid of blue courtesy lights. Traffic is controlled at major intersections using an opticon that is an electric eye device attached to the traffic signals. Goshen has become one of the busiest fire companies in the area. Our ninety-five crewmembers responded to more than 600 fire calls and 2400 ambulance calls in 2007.

Our Past and Present Division Chiefs & Presidents 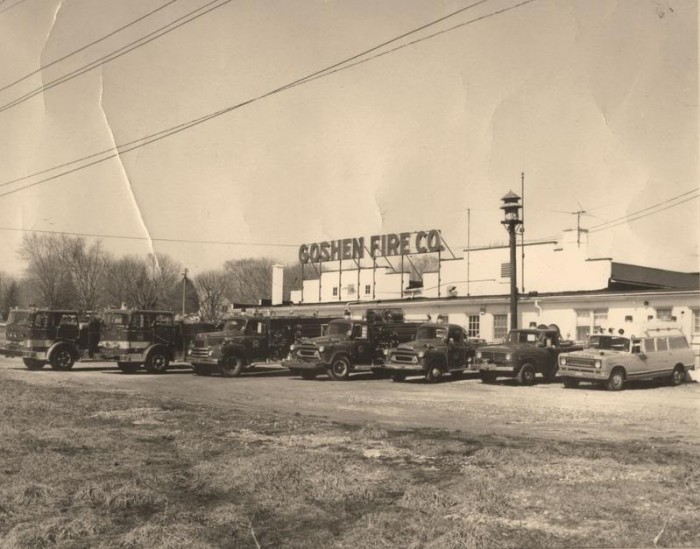 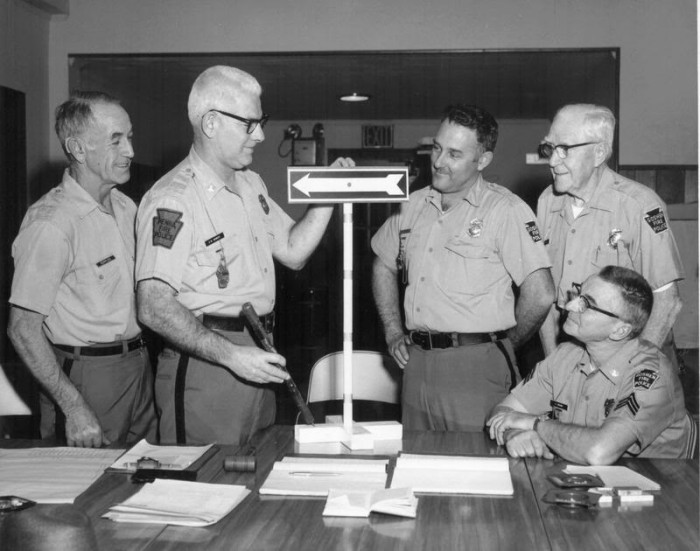 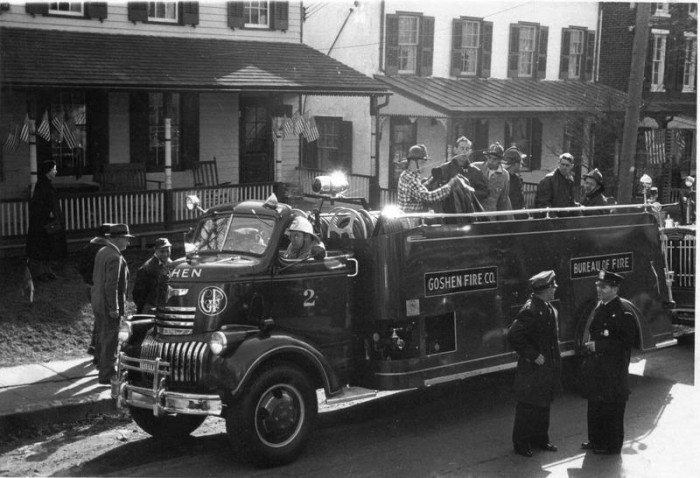 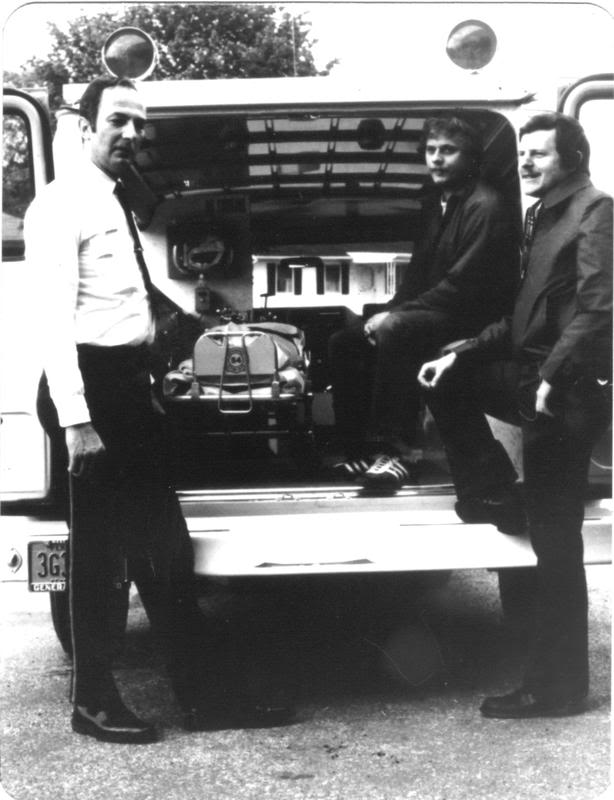 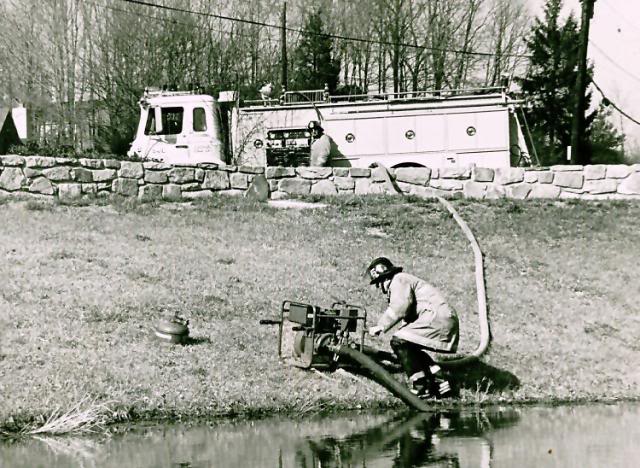 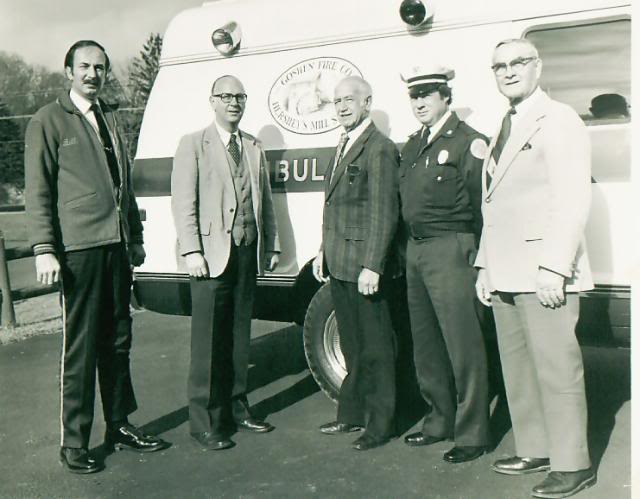 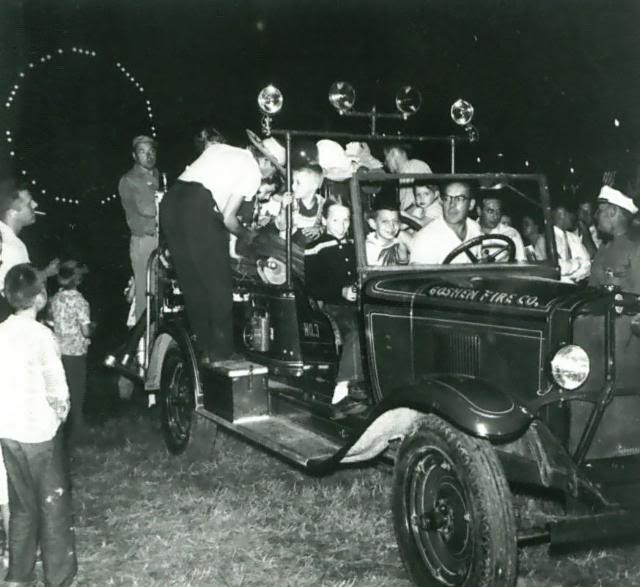 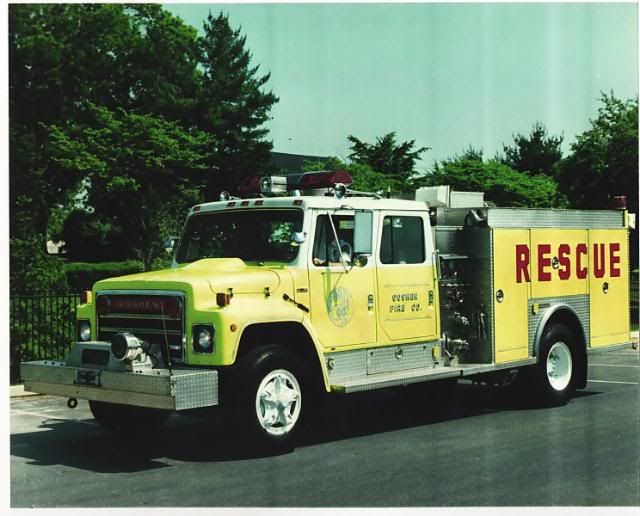 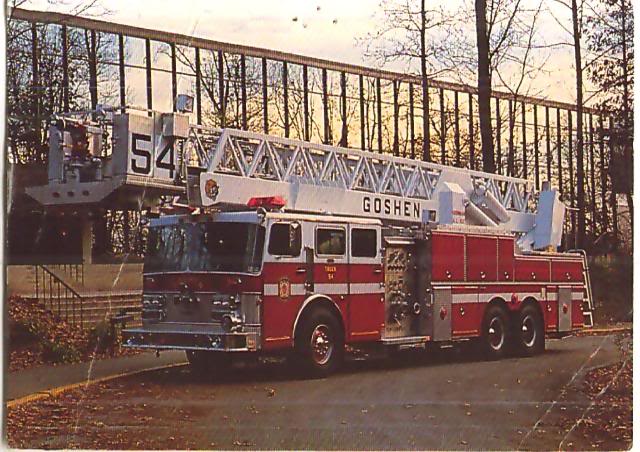 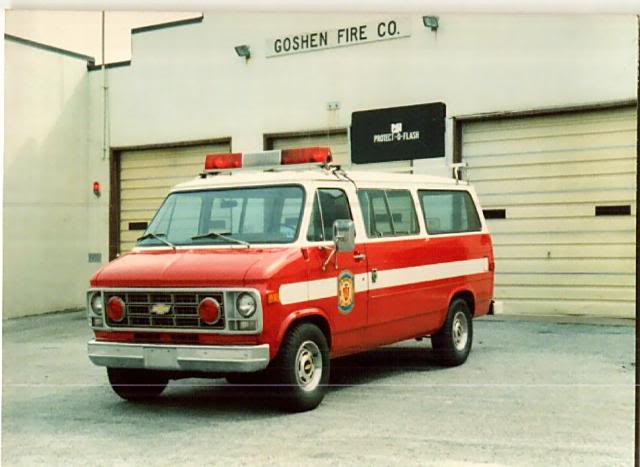 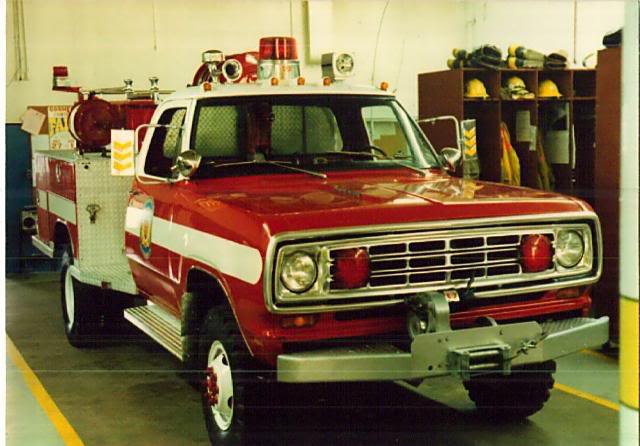 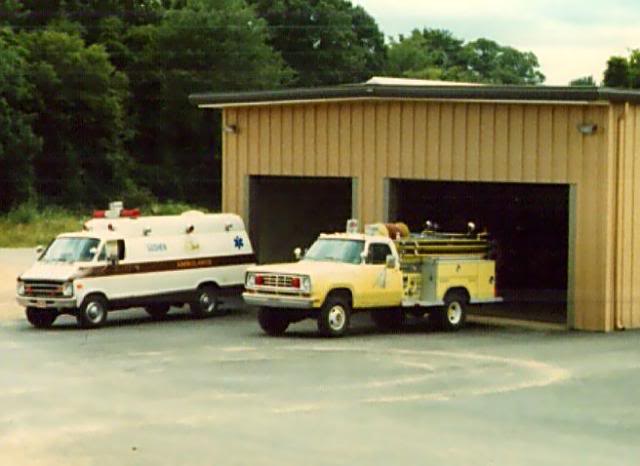 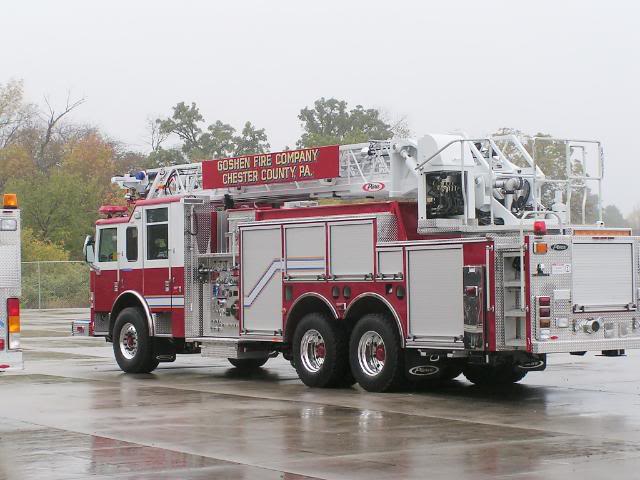 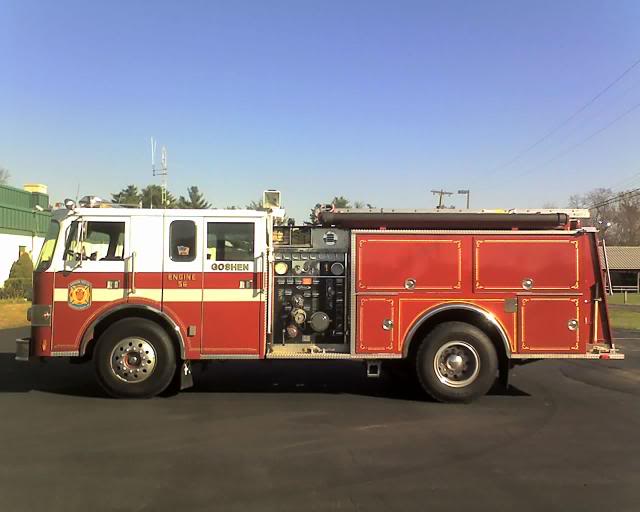 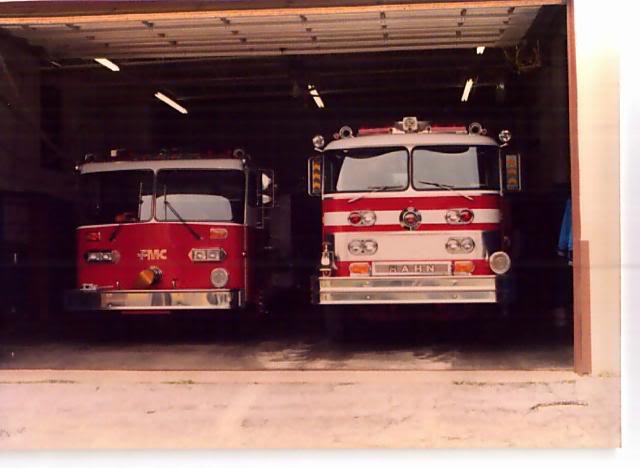 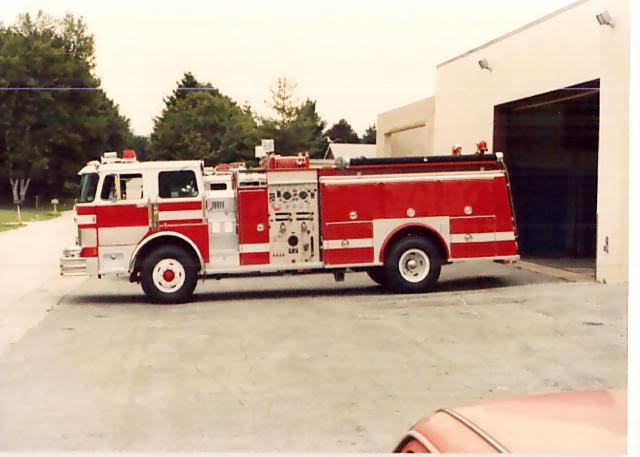 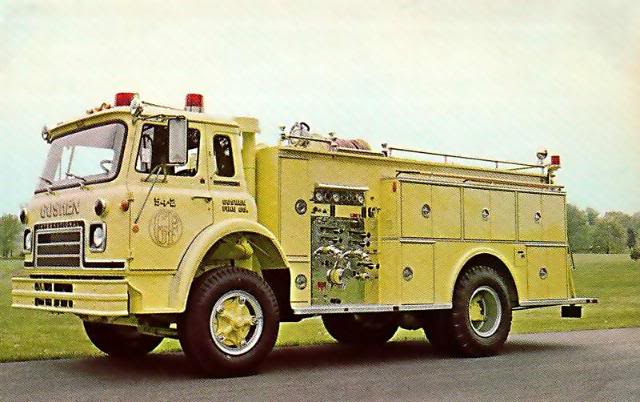 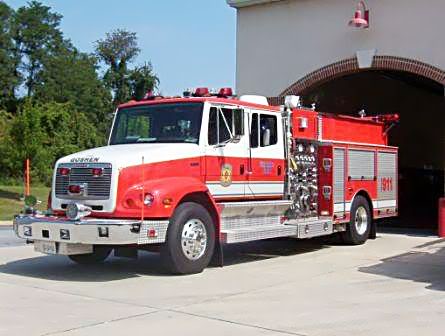 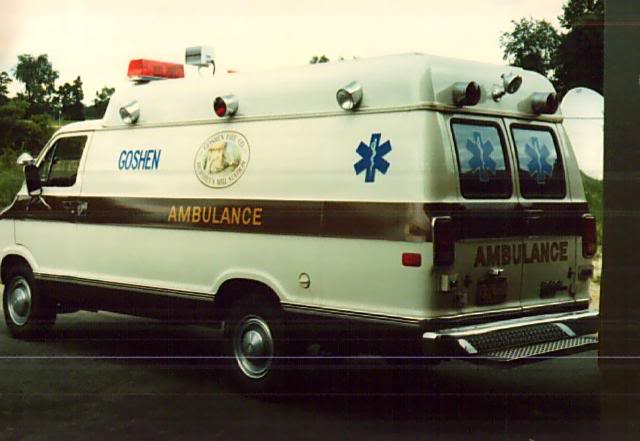 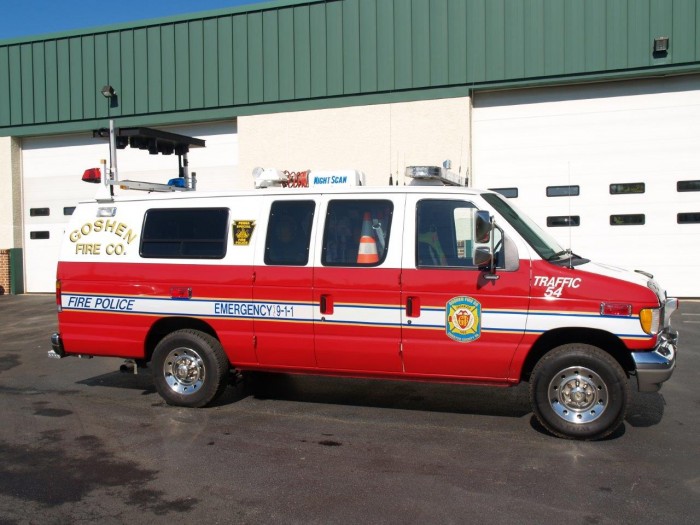